The fantastic new facility will provide a safe and secure environment for its pupils to flourish, set in the stunning setting of the growing neighbourhood.
Mike van den Berg | Senior Development Manager
Urban&Civic

Work to build a new primary school in a growing community on the edge of Newark is progressing well.

The main steel structure of Christ Church CofE Primary is now up at the new Middlebeck neighbourhood.

Work began on designs for the building in 2017, and once the first phase is complete it will feature seven classrooms, a library, main hall and small hall, commercial catering kitchen, respective administrative functions and ample outdoor facilities.

The building will have striking features with ample floor to ceiling heights and a roof design which will stand out as a key feature within the development. The building has also been designed to allow for future expansion of up to a two and a half form entry Primary School, with a further eleven classrooms due to be constructed on the eastern wing to enclose the courtyard. 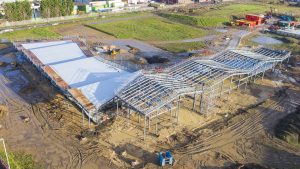 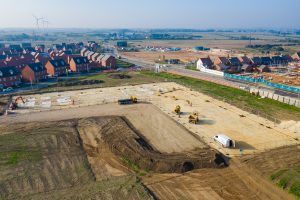 Led by Lindum Group, the project is a joint partnership between Middlebeck’s master developer Urban&Civic and the Diocese of Southwell and Nottingham.

The organisations hope that the delivery of the new facility, which will see Christ Church Infant School expand into a full primary school, will support Nottingham County Council by providing much-needed school places throughout the area.

Once complete, it will offer a total of 525 spaces for pupils of the growing community and will be latest piece of infrastructure delivered at the neighbourhood, which is currently home to over 180 families, an independent cafe Gannets Middlebeck and a host of green spaces and waterways.

Located in the heart of Middlebeck, it will welcome its first intake of reception pupils this September. The move of pupils from Newark’s current Christ Church Infant School to the new facility will be implemented gradually, with existing pupils relocating to Middlebeck in stages to grow into the full primary school.

Its newly appointed headteacher, Mrs Alison Richardson, takes up her new role this term to prepare for the school for its new home at Middlebeck.

Mike van den Berg, Senior Development Manager for Urban&Civic at Middlebeck, said: “The installation of the steel structures on site is a significant milestone for the construction of the school and for the community at Middlebeck. The fantastic new facility will provide a safe and secure environment for its pupils to flourish, set in the stunning setting of the growing neighbourhood.

“Already home to a popular café, Gannets Middlebeck, and extensive outdoor spaces, this latest piece of infrastructure is the next key amenity to be delivered on-site. Importantly, it will provide much-needed school places throughout the district and will offer residents educational facilities on their doorstep, so the school run will never be more than a short stroll away.

“As well as constructing high quality buildings, we are committed to playing an active role in supporting the future of our schools long after the facility has been built. That’s why we’ve partnered with the Diocese of Southwell and Nottingham to deliver an outstanding, inclusive education for our pupils.

“We look forward to working closely with Nottinghamshire County Council, the Diocese of Southwell and Nottingham, Lindum Group and Christ Church Infant School to deliver this significant project,” she added.

“By the end of this week, we will have completed two thirds of the concrete pour for the floors. This will then allow for construction of the external walls to commence,” he said. “This will pave the way for brickwork, windows and cladding in the near future.

“In addition, Lindum’s KGM division is moving ahead well with the installation of the roof.

“There have been a few issues, caused by the weather for example, but we are working closely with our client to reach the completion date in good time.

“So far we’ve completed four letter drops in the area to keep residents up to date and the local community has been very supportive.”

Formerly known as Land South of Newark, Middlebeck is a 694-acre urban extension on the southern edge of the town.

Lindum is to build a three-storey extension to John Leggott College in Scunthorpe. The work will see 12 new classrooms constructed, along with additional breakout learning spaces. It will also involve remodelling the existing frontage, giving the entire campus a new and modern appearance. Work is due to start in May and is expected to […]

A road will be closed in Grantham from ​8th January ​2022 to allow for repairs to a Grade II listed building which is part of The King’s School. Castlegate will be shut to traffic until at least April while ​several roof ​elevations at The King’s School ​are stripped and replaced. Th​is work is essential to […]

Lindum Group is supporting Newark College’s goal to make healthy food accessible for all its students. The College set up a food bank initiative two years ago to ensure students always have access to substantial and nutritious food. Since the Covid-19 pandemic, demand for the service has massively increased so Lindum agreed to try to […]

A new primary school built by Lindum in the growing community of Middlebeck near Newark has welcomed its first pupils this week. Christ Church C of E Primary School is a state of the art building which was constructed by Lindum for master developer Urban&Civic (U&C). Nestled within the flourishing neighbourhood of Middlebeck, the school […]

The newly renamed Hub in Sleaford is ready to open following a year-long £1.2 million transformation by Lindum Group. Previously known as the National Centre for Craft and Design, the Hub reopens to the public on Monday 17th of May. It now offers a new and more accessible ground floor gallery area, performing arts and […]

Lindum has been appointed to build a state-of-the-art education hub to help combat a skills shortage in the Bassetlaw area of Nottinghamshire. The former Bridge Court building in Worksop town centre will be transformed from a neglected eyesore into a modern and contemporary learning facility. Once complete, it will offer training across a range of […]

Lindum has started work on two new college buildings which will teach precision farming and focus on reducing the environmental impact of agriculture. Bishop Burton College is investing £2.7m in new Institute of Technology buildings in Yorkshire and Lincolnshire. Once complete, they will offer cutting-edge agricultural education which will specialise in delivering higher-level technical skills […]

Children in Nottingham were given lessons in recycling and sustainability as part of building work at their school. Pupils from Claremont Primary School, in Claremont Road, were taught about the impact of single-use materials and shown how to reduce the amount of waste that’s sent to landfill. They also took delivery of new playground bins, […]

Lindum is building a new primary school as part of a major urban extension on the edge of Newark. Master developer Urban&Civic awarded Lindum the construction contract as it brings forward the new neighbourhood called Middlebeck. The school will be located in the heart of the development and will welcome its first intake of pupils […]

Lindum is building a £2.2m extension to New College Stamford’s Borderville Sports Centre.
The work includes creating six additional classrooms, a specialist sports laboratory and a fitness studio.
Lindum Peterborough is delivering the scheme after being awarded the contract through a competitive tender last year.